Let’s see…..What do I drive to work this morning?  My Porsche or my Maserati?  Gosh, it’s such a tough choice.   When I read all the rhetoric coming out of the Pentagon theses days about the tough choices they are making over there, I tend to think that’s their definition of  a “tough choice.” 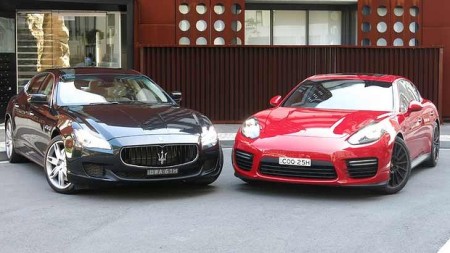 Granted they do make a few hard choices, but none of them are the budget choices they are making for the FY15 budget that’s on the Hill right now.  They have so much money to deal with that the normal ways in which you or I would deal with problems is not possible.  There are several reasons why I believe the tough  choices are not possible.  In fact, in the Pentagon the toughest choices are actually the easiest.  Take for example the luxury of scale.  Because of the vast quantity of money the Pentagon has, scale makes things easy.  Let’s just say for the sake of argument that the total Pentagon budget for 2015 will be around $550 Billion.  I’m  working on the budget and I need to come up with $5oo million to pay for my “widget ” program because it’s two years behind schedule and Congressional support is waning.  I dare not go to the Hill and ask for more money.  What tough choices can I make?  How about I assume the inflation rate for next year will be 0.1% less than it currently is….Guess what?  Instant $550 Million in my pocket.   Problem solved!

Another factor which prevents the tough decisions is the herd mentality.  It’s much safer to stay with the herd than to break away.  Suppose one senior leader in DoD, uniformed or civilian had said, “I value people over weapons.  The margin of superiority that we enjoy over our adversaries is so great that I don’t mind shaving a few dollars off my massive budget to ensure I fulfill the promises we made to our Number One weapons system, our people.” What do you think would happen?  That person would be dragged to the River Entrance and publicly flogged and made to walk the plank into the Pentagon Lagoon.  So it’s much easier and safer to stay with the herd.  The tough decision is to break away from the herd and stand on principle.

Yet another problem in the way of making tough decisions is the limited line of sight of senior people.  They only know what their staffs want them to know.  And if you have ever been a staffer, you know that staffs tend to seek out the solution of least resistance in order to move on to the next problem.  Solving the problem is more important than how the problem was solved.   If everyone tells SECDEF that the only way to balance the Pentagon budget is to make the tough choice to continue to fund (and actually add more money to) the worst performing acquisition program in history, the F-35, and to pull money from Commissaries, up TRICARE fees and fiddle around with the retirement system, he believes them.  Somehow that seems like a no-brainer to me.  A few billion dollars is not going to make a difference in the JSF.  It’s already over $160 Billion over budget and 7 years behind schedule.  Does anyone think the money saved by cutting Commissary subsidies by $1 Billion is really going to make a difference? Well, not to the JSF, but it will certainly make a difference to a young E-2 Marine who is already on food stamps and struggling to make ends meet!

There’s also the Irreversibility Principle.  I saw this time and time again when I was in the building.  In fact, I admit guilt in actually using the Irreversibility Principle to my advantage.  It goes something like this:  The DoD budget is so complex and large that once it’s put together, it’s impossible to start over.  If you don’t get your oar in the water at the very beginning, then you will be unable to make a change.  If you want to have any hope of making a tough decision with major impacts, it must be made very early.  What do you think the DoD budget would look like if in the very beginning SECDEF had said, “Whatever we do to balance the budget, it must not be on the backs of our people.” I guarantee you there’s plenty of wiggle room to develop the budget without monkeying with people programs.  Just take a look at my previous article, Food Stamps and Decisions, and you will see what other things might be done besides chopping people programs.  The tough decision is to declare the Irreversibility Principle null and void and demand a change.  Heck, there’s so much churn in the development of the budget these days a little more chaos isn’t going to make much of a difference.

Finally, there’s the Fixation problem. Ralph Waldo Emerson said ” A foolish consistency is the hobgoblin of little minds, adored by little statesmen and philosophers and divines.”  For example, over the past few years there has been attempt after attempt to raise TRICARE fees again and again and again…(sorry , I got carried away!).  Each time it’s shot down by the Congress and public opinion.  But it’s their baby now, and to back down would admit defeat.  There’s a “pay any price, bear any burden” mentality now associated with the TRICARE issue to the detriment of looking for alternate solutions.  This is what happened with Asiana Airlines Flight 214.  The pilots got so focused on the landing threshold and altitude they forgot to monitor airspeed and engine power.  The same thing happens in the budget process.  People get so focused on a single solution that they forget to look for others.

So it’s hard to make tough choices in the Pentagon.  If there’s any hope of actually getting to the tough choices that NEED to be made, the following “Tough” decision barriers must be addressed:

How will we know when “tough” decisions are being made?  I think there are a few signs:

If the Five Barriers to tough decision making are removed, we just might see some of those signs in our lifetime.

One Reply to “Porsche or Maserati? What to Drive?”