I just finished plowing through the 2014 Performance of the Defense Acquisition report published by Office of the Under Secretary of Defense, Acquisition, Technology, and Logistics (AT&L). 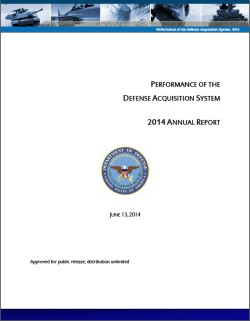 I was prompted to look at it when I saw this article in the Washington Post on what motivated contractors, according to the report.  Pardon my suspicion at a report bragging about how well the current crowd at AT&L is doing, but I’m suspicious.  First….there’s a lot of statistics included and my experience is that statisticians can twist the numbers to say anything.  As evidence, I note there wasn’t much bad about the JSF (perhaps the worst performing program of all time) in the report.  Oh sure, it appears, but if one were to just glance at the charts and graphs where JSF is mentioned, you get the impression that it’s just a middle-of-the pack program…..lots of programs perform worse, a few perform better.  EXCUSE ME?  This baby is already $160 Billion behind schedule and 10 years late in delivery (and still counting by the way, especially given the disastrous fire at Eglin Air Force Base last week). How DoD can publish a report on performance of the Acquisition system without including a chapter on why the JSF program is so gooned up is beyond me.  It’s like the YouTube video when the gorilla walks through the basketball game.  Am I the only one who noticed?

Another item I thought was interesting was the conclusion that although Firm Fixed Price (FFP) contracts do perform better and generally exhibit less cost growth, the report concludes it’s because most of those contracts are lower risk anyway.  Oh by the way, the evil part of FFP contracts is that the vendors who do a good job of managing cost and performance of their programs are probably making more profit and therefore gouging the Government.  I can hear the conversation in the Pentagon now, “That darn contractor actually delivered on-cost and on-time, so we must have given him too much money!”  That substantiates my belief that the Pentagon has the uncanny ability to take from good performing programs to pay for the sins of poor performing programs, thereby dooming all programs to some level of common mediocrity.

One other point I thought was interesting….there’s no mention of contracts that were awarded on a lowest price, technically acceptable (LPTA) basis.  Some in industry contend that DoD is so bent on doing things on the cheap, that quality has suffered when contracts are awarded on an LPTA basis. I don’t know if that is just sour grapes from the expensive losers or truth.  No one seems to care…….about the quality any way.

Back to the title…..What were the conclusions?

So there you have it.  My little list of what incentivizes contractor to perform better goes like this:

To be fair, I think that there have been improvements in the acquisition process and those in the driver’s seat deserve a pat on the back.  But in the end,  the fundamental problem is that the requirements process never gets it right and we spend lots of time and money recovering.  Congress doesn’t help things with its inability to pass a budget either.